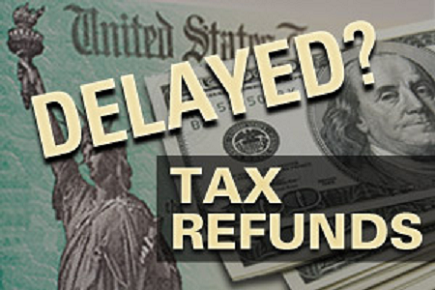 There is a potential tax delay right now. Hundreds of IRS employees are skipping work which could lead to your tax refund being delayed in 2019.

Hundreds of Internal Revenue Service employees have received permission to skip work during the partial government shutdown due to financial hardship, and union leaders said Tuesday that they expected absences to surge as part of a coordinated protest that could hamper the government’s ability to process taxpayer refunds on time.

The Trump administration last week ordered at least 30,000 IRS workers back to their offices, where they have been working to process refunds without pay. It was one of the biggest steps the government has taken to mitigate the shutdown’s impact on Americans’ lives.

But IRS employees across the country — some in coordinated protest, others out of financial necessity — won’t be clocking in, according to Tony Reardon, president of the National Treasury Employees Union, and several local union officials. The work action is widespread and includes employees from a processing center in Ogden, Utah, to the Brookhaven campus on New York’s Long Island.

The move is the leading edge of pushback from within the IRS, and it signals the potential for civil servants to take actions that could slow or cripple government functions as the shutdown’s political stalemate continues in Washington. U.S. Department of Agriculture meat inspectors have begun to call in sick, Transportation Security Administration sickouts at airports have been rising, and federal law enforcement agencies say the shutdown is increasing stress among agents and affecting investigations.

Employees who process tax refunds, she said, are among the lowest-paid IRS workers. Some are worried about losing their cars.

Bennett, 63, who has worked nearly four decades at the IRS, most recently as an accountant, said she, too, can no longer afford her commute. She plans to request hardship leave if the government calls her back to work.

Sakeya Cooks, 24, another IRS worker who guides taxpayers through the refund process, said she might never report back to work. She already has applied for a new job at a Kansas City bank.

“How am I supposed to live like this?” she said. “I’m worried about losing my apartment.”

John Koskinen, a former IRS commissioner, said federal employees are dedicated to the agency’s mission but might be reaching their breaking point.

“As you put more and more pressure on the system, you increase the risk of a significant glitch,” Koskinen said. “If I were the administration, I’d be troubled. The pressure is going to mount.”

Back to top
mobile desktop